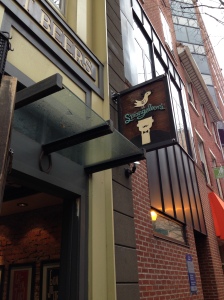 Finally this Gal made it to Strangelove’s. This place has long been on my list of beer establishments to try in Philadelphia and it’s the sister establishment to Local 44 and one of my top 3 Philly Favs – Memphis Taproom.

Strangelove’s is located in center city Philly which means either garage or street parking. I purposely chose a Sunday to visit with hopes center city wouldn’t be over crowded meaning traffic would be minimal and parking a bit easier. Nailed it! Found a parking spot right across the street from Strangelove’s. Yes, this Gal can parallel park thanks to numerous visits to the City of Brotherly Beer.

From the street nothing particular stands out about Strangelove’s but I was excited just the same. Strangelove’s definitely has a more upscale center city feel to it than it’s sister establishments but still very welcoming. The place is small with a long full service bar to  the right with a beautiful marble surface and tables along the wall to the left. Overall it has a slight industrial feel to it while offering up a warm atmosphere. I would suspect when crowded it could be a bit loud but on this particular afternoon there were just a handful of patrons enjoying a bite to eat while sipping on some fabulous beer.

This Gal was meeting a friend who had already taken up residence at the bar and enjoying his first beer. I happily perused the tap list that offers a variety of styles on tap and was delighted to see out of the 19 beers offered 2 were engines and 5 were beers brewed especially for Strangelove’s by various breweries. One particular brewery leaped off the list at me – The Brewer’s Art – this brewery has been a long time fav of this Gal and it’s been forever since I’ve had the pleasure of enjoying one of their beers.

First up:
Strangelove’s Brewer’s Art Porch – Belgian-Style Pale Ale 4.5%
I was very pleased with this beer which had a yeasty floral quality to it that was balanced out by the malts and fruits.

Roy Pitz Sour Hound – Sour Brown Ale 5%
This Gal was intrigued by the fact that it’s a sour brown. I love a good brown ale and wish I would see more of this style on tap list. The fact that it was a sour too was a bonus. It did indeed make for a unusual but enjoyable ale. Earthy bread quality with hints of sour from the tart citrus fruits.

Free Will + Strangelove’s Eden – Saison 4%
This was not your typical saison, in fact it was so different I questioned whether or not the correct beer had been served – it had. The citrus was there as were some white pepper notes but something was odd and not in a bad way but in a way that I can’t wrap my taste buds around it.

Tastes of:
Nodding Head Monkey Knife Fight – Lemongrass Spiced Lager 5%
Surprisingly wonderful. You can really taste the lemongrass but it doesn’t over power. This would compliment Thai food perfectly.

Stranglove’s Manayunk Minor Brett – All Brett Belgian- Style Pale Ale 5%
Tart! The edge is taken off the tartness by a hint of citrus.

Conshohocken Brewery Puddlers Row – ESB 5.4%
Had a young taste to it with a mix of grass, malts and citrus. Not a favorite but very drinkable.

To accompany the beer we ordered some much needed food. The food menu at Strangelove’s  is eclectic and certainly offers something for everyone. This Gal went for the Smoked Tempeh Muffaletta which was out of this world good. My friend had the Oyster Po’Boy and said it’s one of the best he ever had. Now we have both visited New Orleans’s a couple of times so we know what a good Po ‘Boy and Muffaletta should taste like and these ranked up their with the best NOLA has to offer.

The same owners recently opened two other establishments in Philly, that this Gal needs to check out, Clarkville and Coeur. In the mean time I’m happy I finally got to spend a fun afternoon at Strangelove’s.

Looking to spend a day or two checking out the beer scene in the city of Brotherly Beer? Following is a list of suggested Pub Crawl destinations for Philadelphia broken up by neighborhoods. This is just Geeky Beer Gals suggestions for possible Philly Pub Crawls. YES, there are a lot of good beer bars in Philly but I tried to keep the list to exceptional beer places. So if you don’t see one on the list it could mean:
a. I didn’t know about it or
b. it’s good but not exceptional

I haven’t  tried each place personally, a number of them but not all of them. However, I trust my beer team with their recommendations.

Have fun tasting your way through the city of Brotherly Beer.