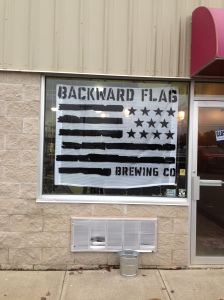 Backward Flag Brewing is a much welcomed addition to Forked River, NJ and I for one am thrilled that it’s located a mere 4 minutes from this Gal’s parent’s home. The owners are active military personal who decided to follow their dream and open a brewery. I honestly don’t know how they do it all but they do it well.

Torie, one of the owners,  was kind enough to allow me stop in one week night even though they technically weren’t open. She took a chuck of time out of her crazy schedule to chat with me about the brewery, beer in general, and their beer.  One can learn a lot from her about beer and I truly appreciated the time and knowledge she shared with me.  I also greatly appreciated be given the opportunity to tastes all the beers they currently had on tap. I have to say they brew great beer! Everything I tasted was top notch. This isn’t a fluke they have worked hard to get

their brewing to where it is today. They’ve only been open for a few months and yet the beer didn’t have the new brewery beer – still needs tweaking – taste to it. It’s clear they really have taken the time, effort and energy to brew the beers how they were meant to be brewed.  Sure they have mis fires but they recognize them and dump rather than serve them it to their customers. 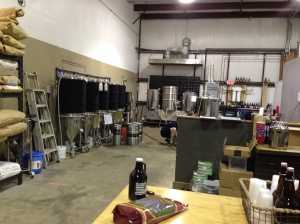 The brewery is small but they already have plans to increase the brewing capacity and, sit down for this one, plan on brewing sours in the near future! Woohoo! The brewery offers a family friendly environment with a laid back atmosphere with a beautiful handcrafted bar to hang out at and I admires the clever use of pallets for seating and decor. While there feel free to pick up a piece of chalk and do your best Picasso impersation on the floor.

As you might have guess it’s also community oriented and very military friendly. If you have a patch from your unit bring it in for their wall of patches. 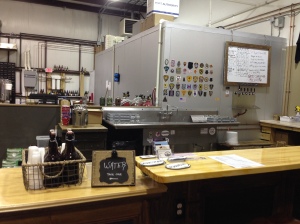 Backward Flag Brewing should be placed near the top of your New Jersey Breweries to Visit List and a brewery to keep your eye on. I suspect we’ll be hearing and drinking a lot more from them.

Xmas Edoris Porter 8.5%
brewed with 25lbs candy cane because of the candy cane I was a bit leery since I’m not a fan of peppermint but this beer was amazingly good and refreshing 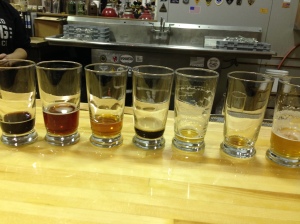 Bamber Brown 5.1%
English Style Brown – old school
loved that they had a brown on tap and this one had hints of  caramel & earthy toasted bread.

Seven 62 DIPA 7.6%
Well done – great nose that lets you know up front the hops are there but the malt undertones help balance everything out.

The Damn Few Pale Ale 9.8%
Their flagship beer and it’s dam good. Smoot and at 9.8% it can sneak up on you. The hops scream to be pared with spicy food. 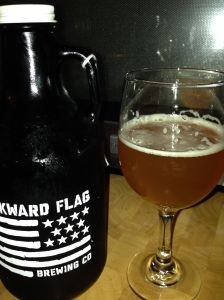 This Gal happily went home with a growler of Damn Few Pale Ale and the knowledge that I would be back soon, very soon.