Starting this month and each month to follow this Gal will be making a Beer Crawl recommendation.

Looking for something to do? Try January’s Beer Crawl…

January’s Beer Crawl takes place in Bristol/Croydan, PA
Start at Newportville Inn with a bite to eat and some fine German beer, then it’s on too one of this Gal’s favorite spots Broken Goblet Brewing were you can enjoy a variety of brews including this Gal’s favorite Ying Yang Stout, next stop Neshaminy Creek Brewing Company where you can show off your pool playing skills while kicking back with a beer, then it’s on to the final stop Dog and Bull – Brew and Music House for snack, some beer and tunes. Enjoy! 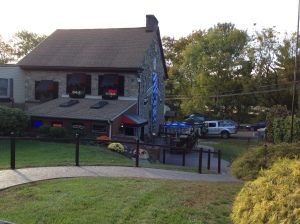 This Gal has been to the Newportville Inn numerous times over the years but it had been a while since my last visit and thought it time to see what’s what. Glad to say nothing much has changed. It’s still a German place through and through. With an outside beer garden, German food and excellent selection of German beers on tap along with a few craft beers too. Oh and let’s not forget the German music playing or the complimentary pretzel nuggets accompanied by the house made mustard on each table. The mustard is wonderful and was a perfect accompaniment to the Paulaner Weiss I enjoyed. 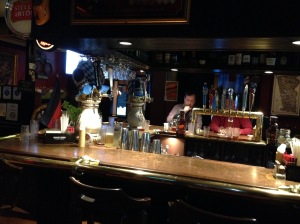 The Inn sits in a large old stone building that seems like it was once someone’s homestead and has that wonderful old world feel to it. You first step into an enclosed porch area that now serves as the waiting area on crowded nights and I believe it’s safe to say they utilize this spot quiet often. From the porch you walk into the bar area. The bar itself is a good size and sits in the middle of the room with fireplaces and tables on either side. The room is very dark and cozy to begin with add in lit fireplaces in the winter time and you have a perfect spot to sit back, relax and stay warm. There’s a long porch/dining area on the other side of the bar and another dining room across from the bar as well. The Inn can hold a lot of folks but because of the lay out is able to maintain a warm personable feel. The one drawback is parking. Even on not so crowded nights parking can be a bit of a challenge but don’t let this sway you from visiting Newportville Inn. The German beer selection alone is worth a visit with 17 German beers on tap plus a hard cider if that’s your thing and the beer is dispensed via ceramic German beer towers.

Keeping in mind this is a German establishment the menu is heavy on German selections but does offer a few vegetarian options as well. My companion and I decided to go full German on this particular evening with both beer and food. Food: Turtle soup, pierogies, potato pancakes and Schweine Braten.

Paulaner Weiss 5.5% – crisp and refreshing with hints of orange to accent the wheat.

Paulaner Salvator Doppel Bock 7.9% – Yes, yes, yes! There’s a reason this Gal named one of her cats after this beer – Salvator – because it’s an amazing! Truly a favorite that I rarely see on tap. I love the combo of caramel roasted malts with hints of chocolate and hops. This beer has been brewed for over 375 years so you know their doing something right.

Next time you’re in need of some time away but your wallet says otherwise spend and evening visiting Germany at the Newportville Inn.

If you’re looking to make a day of it two of this Gal’s favorite breweries are just down the street from Newportville Inn –  Neshaminy Creek Brewing and Broken Goblet Brewery. 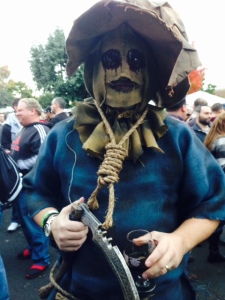 By now you know how this Gal feels about Broken Goblet Brewery and if for some reason you don’t check out my review of the Goblet.

Everything this brewery touches is fun from their beer to their festivals.  Fun, fun and fun! Naturally, this Gal had a ton of fun hanging out at the Hoppy Halloween Beer Fest and, sit down for this one, I don’t even like Halloween. That’s right folks this Geeky Gal isn’t and never has been a fan of the “spooky” holiday. Please do not ask me to dress up in costume for any sort of party or you’ll just get the death stare followed by “why?”. However, I do understand many of you enjoy the costume parties and other festivities that are a part of the Ghoulish Holiday and I have to say attending a beer fest where so many dressed up in costume was pretty cool.

Having been too Broken Goblet many times I wasn’t sure how they would pull off a beer festival onsite but they did it. The festival was set up utilizing the Goblet parking lot and beings they are located in an industrial park there was plenty of parking for guests. There were at least 20+ breweries, bars and meaderies pouring samples along with a few food trucks, and several vendors such as Beer for Babes, Philly Tap Finder and more. Plus, live music! I couldn’t believe they only charged $25 for this event ($30 at the door). Designated drivers only paid $10 and that included free water, ice tea and soda. It’s nice that thought was given to DD’s.  This really ranks up there as one of the best buys in the NJ/PA area for beer festivals.

The festival itself was well organized and laid out. There were plenty of tables and chairs for folks to kick back and relax at. The stage was as the far end so you could enjoy the music but still converse with your friends. Also, there was plenty of space in front of the stage to set up your own chairs and enjoy the show or , should you desire, you could hang out in the hooka lounge near the stage. Favorite thing I saw was kegs of water throughout the parking lot for rinsing glasses and/or drinking. THANK YOU!  It’s the little things that mean the most. Oh and yes real glasses. I understand why festival now a days hand out plastic tasting cups but it was so nice that at the Hoppy Halloween Beer Fest you were given a real glass and a pretty one at that.

Unfortunately, there was a down side to the evening and that was the bathroom situation. Many, many, many more port a potties were needed as there was always a long line at the ones provided. However, the Goblet is aware and has assured festival goers they are working on a solution.

The time of the festival was a bit unusual running 4 to 8pm instead of the normal 1 to 5pm. I for one loved the timing. It allowed you time during the day to get things done and provided for a fun relaxing evening. Of course, the evening hours added to the overall Halloween atmosphere and it was cool to see so many in attendance dress up for the occasion. I was also excited to try many beers I had never had before from breweries I’d never heard of. That alone  is a great reason to pick a couple of beer festivals each year to attend. You’ll have the opportunity to try new beers from new breweries. After all with so many new breweries opening up it’s hard to visit them all. A festival is one stop sipping.

I can’t say I had a particular favorite beer so many were good (I think I only disposed of 2) but I was excited I had the opportunity to sample The Shape of Hops to Come Imperial IPA from Neshaminy Creek Brewing and Broken Goblet’s  All Goblets Have Spirits a Scotch Ale (love Scotch Ales) with Maple Syrup and Gala Apples. I had heard good things about both and was glad to finally sample them. They did not disappoint. I was also supper happy that Saint Benjamin Brewing brought their Koffee Kolsch a favorite of this Gal’s. FYI – tried mixing it with their Little Peat stout and it was wonderful. Remember don’t be afraid to experiment with your beer.

Overall a ghoulishly good time was had and if they host Hoppy Halloween 3 next year I recommend going and suggest getting your tickets early since space is limited and tickets sell out.

Mark Your Calendars! This Gal is bringing together two of the things she loves the most, Dogs & Beer, for Pints for Pup October 11, 2015 at Broken Goblet Brewery Noon to 5pm. A portion of the days proceeds will benefit It’s a Ruff Life Rescue (an all breed dog rescue).